Creating anime-looking bushes and trees requires not only specific shading but also properly created models in regards to display of the shading. This also applies to creating 3D clouds. Of course, this can be done using a 3D-editors’ particle systems by combining both big and small emitters, but the good-looking plants would easily have 50 thousand vertices per model.
So, another way is to create models from textured planes. The plants are usually modelled by placing (either carefully or haphazardly) the planes that contain the textures of the branches. The problem is that each of the quads has its own normal. After rotating and moving all the quads while forming, let’s say, a bush, all the normals would also be chaotically rotated and pointed in all imaginable directions. Thus, later in Unity, the shader would take each of the quads and apply its shading using data from all of these chaotic normals. Such a bush usually would not look well. Knowing this, you’d make the normals look better by borrowing them from something more simple like a sphere.
But creating a bush and its variations still would take much time. Also, changing the number of faces sound like a hassle.
Foliage Generator prefab/component allows you to create a plant or a cloud in a few minutes, and then make changes instantly. It automatically forms the model from the ‘branch’ of your choice, wraps its copies (as many of them as you’d need) around a carrier model and handles the normals.
After generating, the model appears in your project folder ready to be dragged onto the scene. Then you’ll need to just apply a material with the Foliage or Cloud3D shader containing a particle texture. We did all the foliage and 3D clouds models in the demo scenes this way. Quibli includes already made models, textures and materials.
Another beautiful thing is that Foliage Generator can take external models (there are nuances — described here) and prepare their normals and apply the particles for you. 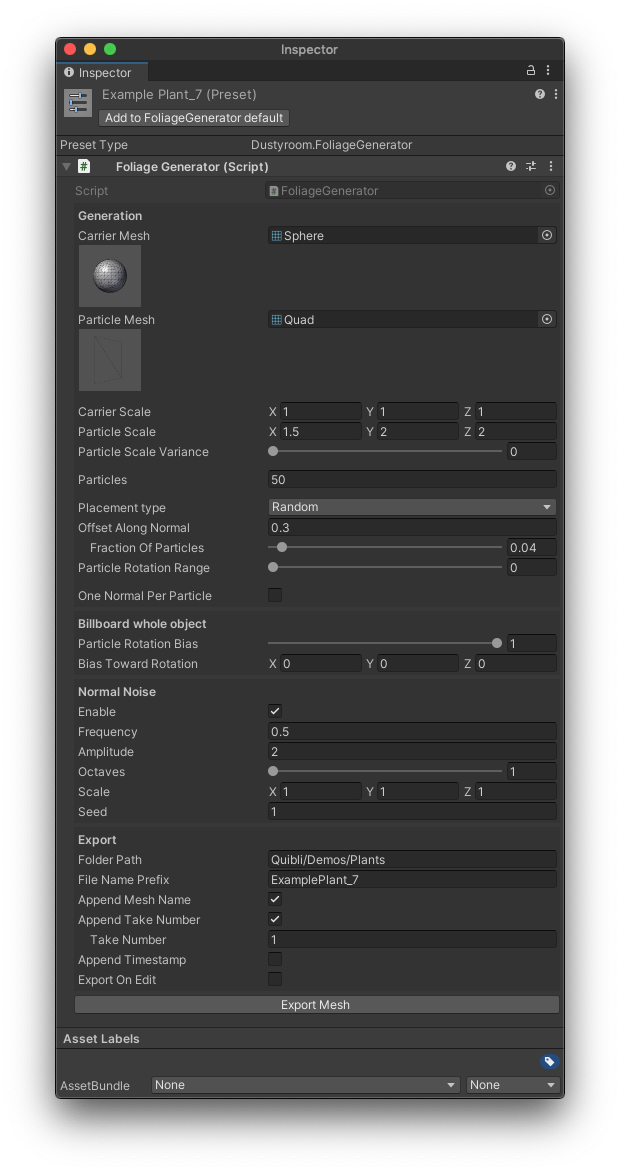 Please, note that Foliage Generator doesn’t produce the trunks of the trees, neither does it create conventional flower plants. It works with included as well as external meshes and processes them so that the generated plants can work as stylized leafy parts of the foliage. However, using the proper textures and a bit non-literal approach, the floral decorations can be created with the Foliage Generator.

It is highly recommended that you opened, for example, the Plants demo scene, located any of the plants in the Hierarchy panel and experimented with its own Foliage Generator instance. Pressing Export Mesh, will update this model. This way you can get to know the parameters better. And, please, remember that all parameters have mouseover tooltips. If you find any of them unclear, please, shoot us an email an we’ll try to improve them.

Beginning to work with Foliage Generator

The Foliage Generator can be loaded into a scene in two ways.

To start working with the Foliage Generator as a Prefab, please do the following:

Another way to add the Foliage Generator to the scene is to use it as a Component.

When you have the Foliage Generator loaded to the scene, you’ll probably want to adjust the parameters or load an existing preset and will need to apply a material to an exported mesh — to finalize the plant model. Please, keep reading this chapter to get acquainted with the details of doing these steps.

Parameters of the Foliage Generator

Generation A group of parameters that control the creation of the plant mesh.

The Placement Type parameter in Uniform mode is useful when engaging Billboard Rotation → Each Face mode in the Foliage shader, described here.

The Placement Type → Uniform mode is suitable for 3D clouds making, as the Billboard Rotation → Each Face mode is hardwired in Cloud3D shader.

Billboard Whole Object is a group of parameters that prepare rotation of the Particles in order for the generated mesh to be used as a Billboard. Billboarding is explained here.

TIP. Particle Rotation Bias is useful for billboard foliage. ‘Billboard’ means that the meshes always face the camera regardless of the camera’s position and rotation. It is a handy feature because you can make up the plant model from only a handful of planes to spare resources, and this plant will always create an impression of a more complex one.

Normal Noise is a group of parameters that control the nonlinearities in the normals of the generated mesh.

Export is a set of parameters for controlling the export process of the generated mesh.

Every time you press the Export Mesh button, the generated model is slightly different, as each time the new seed of random is used.

When a model is generated, the Foliage Generator gives this model a name, which consists of prefixes like ‘Carrier Mesh’, a word from the ‘File Name Prefix’ field and an optional time stamp. Pressing Export Mesh will always create a new model every time you use a different Carrier Mesh (because the exported name will be different). Otherwise, Export Mesh will just overwrite the existing model and will update it in a scene.

TIP. It is convenient to use presets with Foliage Generator: every time you export a nice model, save the parameters for later. After changing everything up on the Foliage Generator interface you can always load a preset (preferably previously titled in a proper way) to fix that bush that bothers you, as long as the name of the existing mesh is going to be the same as the name of the re-exported mesh.

How to Create a Basic Plant/Cloud

A brief tutorial on creating and shading a basic plant in non-billboard, billboard ‘Each Face’ and billboard ‘Whole Object’ modes

When creating a plant (or a cloud — they have common creation approach) model, we suggest to think in advance how many particles it should have, where it will be placed in the scene and how large the Particles and Carrier Mesh are going to be. It is important, because in the end the mesh will be made either as billboard or non-billboard/regular mesh. In addition to this, billboarding is the way to create uniquely looking plants/clouds, which are impossible to create otherwise.
If you are going after a non-billboard model, the number of Particles is going to be high (something like 500—1000) — to cover whole Carrier Mesh surface area without gaps. The size of Particles is usually small (around 0.05—1) — should the particles be high, the non-pleasant plane intersections will be visible. These ranges apply to billboards in Each Face mode as well.
If you are making a model as a billboard in Whole Object mode, the Particles may be bigger and you can have much less of them: you won’t see the _Particles from the sides and the intersections won’t be as much obvious. For such billboards, the shader will take this handful of Particles and ‘squash’ them in the camera direction, which will create an illusion of the full-bodied model.

Below you can see how billboard and non-billboard behave with camera’s rotation and position change. This behavior is set in Foliage shader.

Non-Billboard foresees the commonly understood behavior of the meshes: they do not rotate with camera movement and they usually require more particles in order to cover its whole surface area, unlike the billboards, where only the front (in ‘Whole Object’ Billboard mode) or only the particles/branches (in ‘Each Face’ Billboard mode) of the model will always be visible to the camera.

The Foliage Generator script makes up a mesh ready to be imported in your scene, but to finalize its look, the material is needed.

When you drag the exported plant or cloud model into the scene, you’ll notice that it is pink, which tells that it is has no material yet. You can create a Foliage or Cloud3D material or choose one the bundled materials coming with Quibli, and either drag it onto the model, or select a material in the model’s Mesh Renderer.

Using Your Own Models

Foliage Generator can process external models that are used as Carrier Meshes (more about what is a Carrier Mesh is here). Foliage Generator processes the normals and UVs of those meshes according to the parameters you set in its interface, so that the applied particles would look suitable.

For custom Carrier meshes, it is recommended to use the models that have as even quad distribution as possible. Such models would carry the particles evenly, so that the exported meshes won’t have unfilled gaps on their surface.

Another important moment in choosing a custom Carrier Mesh is to look if it is convex. Even if the model is concave, it is still better to not use the solidified thin models that have big parts of surface closely located. In the example below you can see that outer and inner surface parts of the vase are located very closely to each other. In the end Foliage Generator will place branches on both outer and inner parts of the vase, and in addition to that, they will be crossing each other. 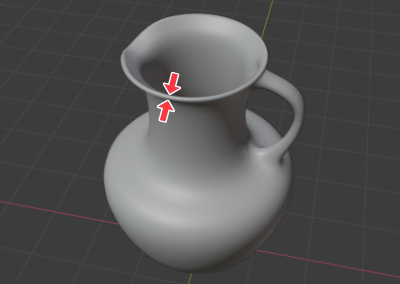 Please, try not using thin solidified models, as the particles will be on both sides and they may be crossing each other badly.

Next Steps After Using Foliage Generator

Using the Preset menu for the Foliage Generator